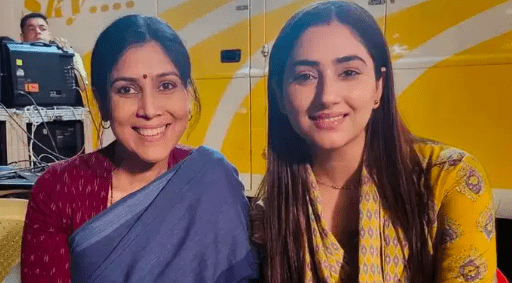 Sakshi Tanwar made an appearance in Bade Achhe Lagte Hain 2, and actor Disha Parmar was blown away by his presence. She took a picture with the “real” Priya and posted it on her social media accounts.

For the uninitiated, Sakshi Tanwar played the role of Priya Sharma in the first season of Bade Achhe Lagte Hain which was a huge hit. She was paired opposite Ram Kapoor and it was a story of two people brought together by fate and how a love affair develops between the matured couple. Their kiss scene was the first to be shown on a TV screen in India, and it created an uproar everywhere. However, the show’s creator, Ekta Kapoor remained unfazed and at the time said it was important to break the bar.

In the photo, Disha Parmar was seen in her character, the avatar of Priya while Sakshi Tanwar wore a cotton saree with a script in her hand. Disha captioned the post, “Priyas from different worlds! 😍 What a pleasure to work with her. Lifelong admirer! ♥️

Speaking of the second season, fans love the camaraderie between Disha Parmar and Nakuul Mehta. Recently, a con**m scene between the two went viral and netizens parted ways. Bade Achhe Lagte Hain 2 is often in the news for its interesting storylines.

However, the show even faced the wrath of its fans a few months ago when the negative characters were given more screen space. One user even wrote to the channel, “Give us a meaningful conversation between Ram and Priya, not some fucking lollipop.”